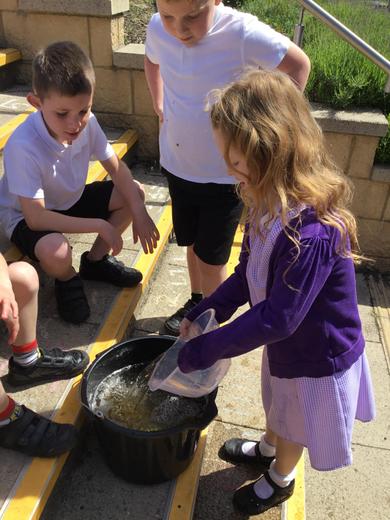 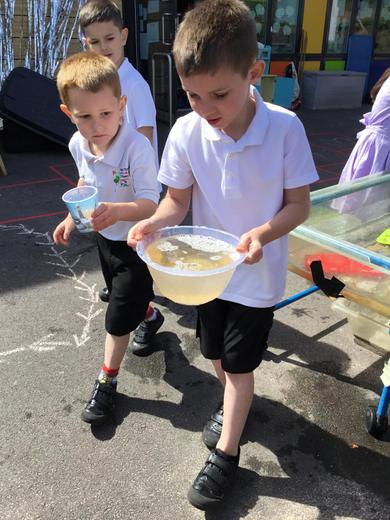 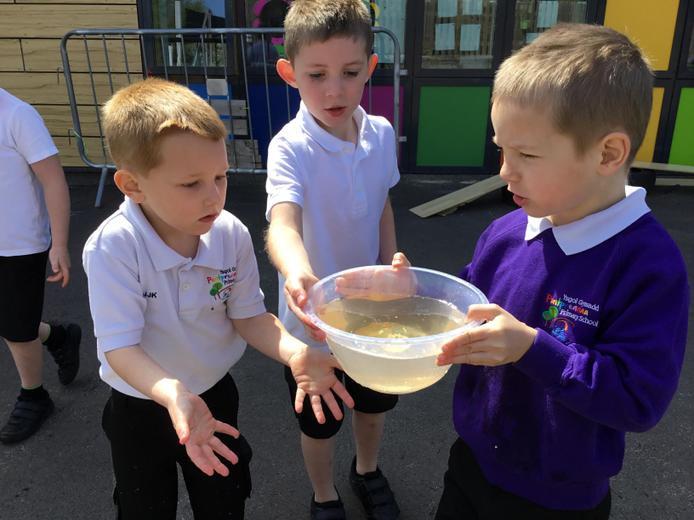 Our math focus this week was initially on weighing, predicting which items would be heavier/lighter than others and placing them in order. We then used a bucket balance to weigh the items using cubes. Our focus then moved on to capacity. We compared different containers and talked about which ones would hold the most/least water. The children then worked with a partner to find out how many cups it would take to fill the containers and recorded the results, using a tally. Some groups then displayed this information on a block graph.

Our literacy work continues to focus on using Talk 4 Write. This week we have been innovating a song 'Your Imagination'. Following the same steps as previously we started by learning the song with actions, we then drew a story map of the song before innovating it to include types of weather (in relation to our topic Splendid Skies), we then finished by writing our innovated songs, using the story maps.

Through our topic work this week we have been looking at light. One of our activities has focused on looking at sources of light and whether they are natural or man made. The children have been sorting items into groups. Another activity has involved a QR code hunt. After locating the QR codes the children have been scanning them to find out a fact about light. We have then been using the facts to create a mind map.

In the enhanced provision the children have had the chance to play seasons bingo, complete number bond suns, write secret messages (using light pens), write weather reports, make sun dials, create sun/star collages, make shadow puppets and use them in the shadow puppet theatre, match sources of light with the locks and keys and role play in the observatory.

Unfortunately not the ones with chocolate chips.

Some cookies are necessary in order to make this website function correctly. These are set by default and whilst you can block or delete them by changing your browser settings, some functionality such as being able to log in to the website will not work if you do this. The necessary cookies set on this website are as follows:

Cookies that are not necessary to make the website work, but which enable additional functionality, can also be set. By default these cookies are disabled, but you can choose to enable them below: